When enabling WCP (Workload Platform) on your vSphere cluster, by default 3 SupervisorControlPlaneVMs (SV) will be deployed. (Those VMs are also sometimes referred as "agents") 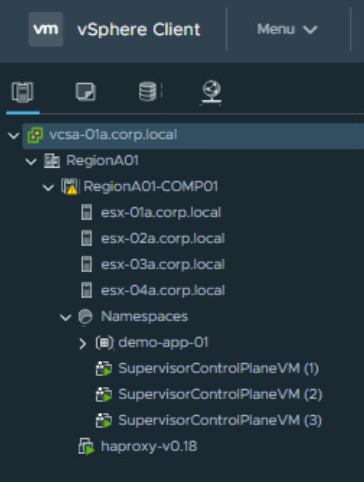 Those VMs contain a Kubernetes cluster used to:

If you’re using this in your lab, you might already know that the control plane VMs can be reduced to 2 nodes by modifying the wcpsvc.yaml of the wcp service on the vCenter.

As the smallest deployment size has 2 vCPUs, 8 GB RAM and 75 GB disk, you can safe same resources in a lab.

However one caveat is that once vCenter will be updated, the change is reverted and the third Supervisor VM will be deployed again. To reduce the nodes to two, you had to re-do the configuration change and re-deploy WCP. If already running workload, this can result in quite some work.

As far as I understand, three components are majorily involved when deploying those Supervisor VMs:

Disclaimer: Before proceeding, please note that this is absolutely NOT supported and is not suitable for production environments. If proceeding, you should also be prepared to redeploy WCP at any point if something doesn’t work as expected. You have been warned.

Enough theory. Let’s do some magic.

As usual: Backup is advised.

When downscaling the SupervisorCluster we go through multiple steps:

First, we change the wcpsvc.yaml configuration file to set minmasters and maxmasters from 3 to 2 nodes. Then restart the service so that changes take effect.

I have prepared some easy commands to copy:

Don’t close the SSH session to vCenter yet.

3. Remove the node from the Supervisor Cluster

Connect from vCenter to SV VM via SSH

(Tip: If you remove bash <( and the ) at the end, you will see all commands printed to the terminal, without being executed.)

In some instances kubectl get pods -A will show many pods as failed with error NodeAffinity. This is because Kubernetes tries to schedule pods on the node we removed earlier.

To cleanup all of these pods, you can run: (This deletes those failed pods, and only from system namespaces)

(Tip: If you remove bash <( and the ) at the end, you will see all commands printed to the terminal, without being executed.)

As the WCP service now only expects a 2-node kubernetes cluster and we have removed the node from the Kubernetes cluster, we can go ahead deleting the one Supervisor VM we’ve chosen.

As previously noted, this is absolutely not supported. I have performed the steps multiple times in the Hands-On-Labs HOL-2113-01-SDC - vSphere with Tanzu with success and also haven’t experienced any issues in my local lab.

Personally I think that these steps look more difficult than they are. After multiple runs this is done in like 5-10 minutes, which is faster than re-deploying WCP and all workload for sure. If you use this way or re-deploy WCP after a vCenter update is still up to you.

Any feedback appreciated. If there are further questions, please let me know in the comments.

May I introduce my self? I am Patrik Kernstock, 25 years old, perfectionist, born in Austria and living in Ireland, Cork. Me explained in short: Tech- and security enthusiast, series & movies junky. Interesting in Linux, Container-stuff and many software solutions by Microsoft, Veeam and VMware.

wpDiscuz
0
0
Would love your thoughts, please comment.x
()
x
| Reply
Sorry to disturb you with such annoying messages, but the law requires it. This site uses cookies. Yeah, what a shock. Continue using this site means that you can life fine together with cookies.OkayRead more